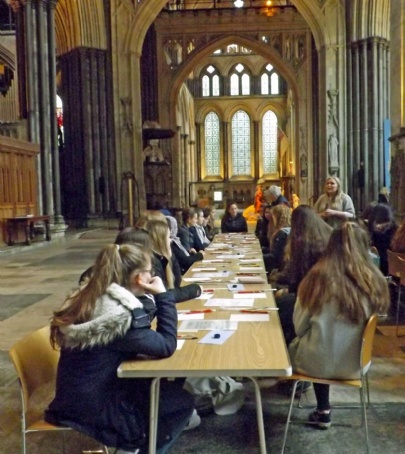 On arrival the Year 10s were split up into three groups. There were four activities during the day; Due Process, a Medieval Tour, Medieval Calligraphy and a Deity carousel – discussing the existence of God.

Group 1 took part in ‘Due Process’ with Cathedral volunteers and High School staff.  One of the cathedral staff played the part of ‘King John’.  The group was split into four teams.  Each team had to guess his answer to a question, with the help of the volunteers and staff, for example ‘How would you like to be ruled?’ The possible answers were: Democracy, Monarchy, Aristocracy or Dictatorship.  This involved lots of debate, and sometimes a raised voice or two!  The game was played on a giant chess-like board with a dice in the Nave of the cathedral.  The teams won points based on where their chess piece was on the board and if they had correctly guessed King John’s answers.  It was great fun and thought-provoking. After the Due Process students visited the Magna Carta in the Chapter House.  Group 2 was split into three small groups in the Nave.  Each group had a 20 minute Deity activity discussing the existence of God with a different member of Cathedral staff.  Meanwhile Group 3 were taught Medieval calligraphy in the North transept.  They learnt about the various tools to write with and about velum and paper.  The girls then had a chance to write their names in ink using their preferred tool.

Each group also had a guided medieval tour of the cathedral by a well-informed guide. The girls learnt about some of the people buried in the cathedral, the stained-glass windows, the measuring of the water under the Cathedral, the Magna Carta and the history of the cathedral.  The girls were able to ask questions and they learnt a great deal from the tour, and all the other activities of the day.  At the end of a very busy day the students were given free time to have a bite to eat and a drink in Salisbury before getting on the coach back to Gloucester.