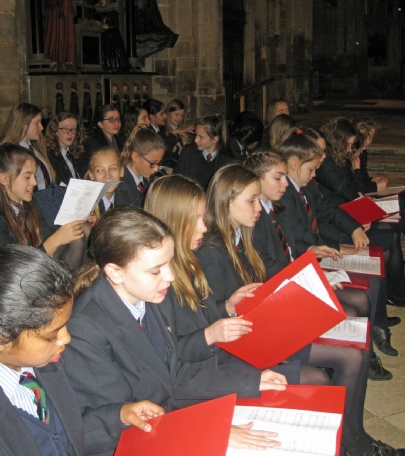 The High School for Girls' Annual Carol Concert was held in the beautiful surroundings of Gloucester Cathedral on Wednesday, 14th December.

The students, staff and parents were welcomed into the Cathedral by organ music before the service played by Jonathan Hope, Assistant Director of Music at Gloucester Cathedral.  This was then followed by the procession of the clergy and the singing of 'Once in Royal David's City'.  The first verse was a solo, beautifully performed by Emily Davis.

The congregation were welcomed to the Cathedral by Canon Celia Thomson and the service was introduced by Charlotte Alcock and Emily Read, the High School for Girls' Deputy Head Girls.

Silent night was performed by the whole congregation after the first verse was sung by the very talented trio of Georgie Stott, Evie Perfect and Harriet Saxton.

The Chamber Choir then performed 'Balulalow' from ‘A Ceremony of Carols’ by Benjamin Britten with the solo by Sophie Ellis.  This was followed by Mrs Sawicka reading Luke 2: 1-20.  Before the singing of the final hymn of 'O Come All Ye Faithful' a prayer was read by the Head Girl and Head Boy, Isobel Green and Harrison Paton.

The Reflection and Blessing was performed by Canon Celia Thomson followed by the Year 13 Singers performing a stunning rendition of 'Carol of the Bells' by Leontovych from a balcony in the Cathedral.

Jonathan Hope, Assistant Director of Music at Gloucester Cathedral brought the service to an end with the Organ Voluntary 'In Dulci Jubilo' (BWV 721) by JS Bach (1685-1750).

At the end of the service there was retiring collection for the Gloucester Food Bank.