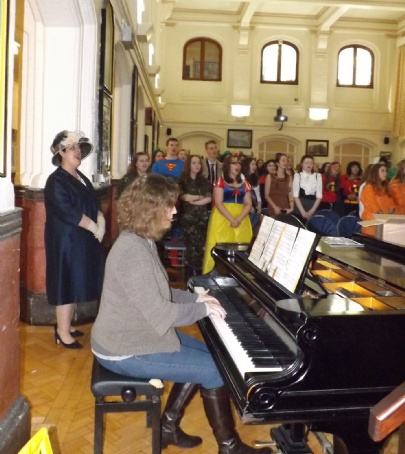 Friday 20th May saw us say goodbye and good luck to our Year 13 students as they left the High School Sixth Form to begin their study leave.

The Year 13 selected the theme for the day of Heroes and Villains, resulting in both staff and students dressing up in an array of fantastic outfits: ranging from Ghostbusters to Disney’s Tinkerbell. The day began with breakfast in the common room where the students reminisced on their time at school with their tutors, signed year books and took copious photos.  This was followed up by a staff vs students quiz, which the students won, as well as voting for the best individual and group costumes. The best individual prize went to Katie Jones who, with impressive face painting, was dressed up as Sheev Palpatine (the Emperor from Star Wars ), whilst the group prize went to Niamh Roderick, Will Warley, Izzie Gillespie and Mili Sheppard who came as characters from Toy Story.  The final assembly was delivered by Mrs Sawicka, in addition to the superb performances by the Year 13 musicians singing 'The Kite String' and the 'Anchor Rope' and Lauren Thornell playing the xylophone, accompanied by Mr Leathem–Pugh.  The final assembly was concluded with a teary-eye rendition of the school song 'Non Nobis' that was heard throughout the school.

The Year 13 students are a wonderful year group and have been superb ambassadors for the school and the Sixth Form. They have worked extremely hard, and we wish them the best of luck with their exams this summer and every success for the future.