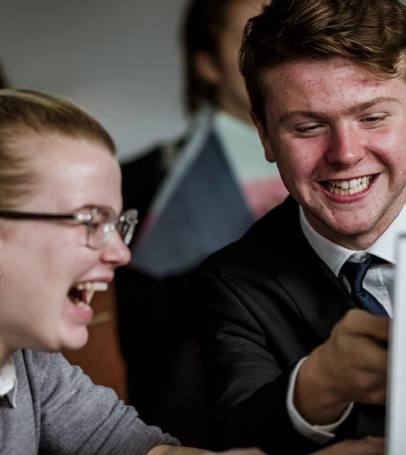 ‘Students recognised for excellence in challenging and unpredictable year”

Excellence at the very highest level was recognised with our top performing students, Elizabeth Candish, Evie Handley and Charlotte Patient - who opened their envelopes to see the complete set of four A* grades.  After seven years at Denmark Road, Elizabeth goes onto Cambridge University this autumn to study Natural Sciences.  Charlotte Patient also achieved four A*s.  She will be studying Psychology at UCL this autumn in the hopes of a future career in research.  Evie Hadley, who has her first fiction book published next month, is going to Kings to read PPE and Mandarin.  The course includes a year in China and she hopes to have a career in international business law before “having a dabble in politics later in life”.

Sophia Decatris achieved 3 A*s in Biology, Chemistry and Mathematics.  She is beginning her journey to becoming a vet at Cambridge university this autumn.  Sisters, Lara and Zoe Veal, managed to avoid any family argument by both achieving sensational grades Lara achieved 2A* and an A and a B and Zoe achieved A*, A and a B.    Eshaah Shakoor arrived in the UK two years ago from Pakistan to study at Denmark Road Sixth Form.  Eshaah, also a member of the Student Senior Team received three A*s.

Amy Griffin declined her university offer and is reapplying to Medicine next year after achieving A*, A*, A* in Biology, Chemistry and Mathematics.  Luke Thomas, another member of the student Senior Team, received A* in Politics, A* in History and A in Spanish.  Luke now goes on to Warwick to read History and Politics.  Charlie Davidson capped a fantastic career at Denmark Road Sixth Form with A* (Geography), A (Politics) and B (History).  He begins his studies at the University of Birmingham this September.  Luke Moore smashed his own expectations and will now go into UCAS adjustment to study Business Economics after his fantastic work ethic was rewarded with A, A, B in Economics, Geography and Politics.  Isobel Davies, is going to Sheffield university to read Politics and International Relations.  She is a future diplomat hoping to gain a place in the Civil Service fast-track.  Isobel achieved A*, A*, A.

Headteacher Miss Giblin’s reflection on results and the exams process

“We are immensely proud of all the work and achievements of our students, especially after such a difficult and disrupted year. Our teachers have worked tirelessly to ensure students are all able to progress onto their chosen pathway.”

Once again Denmark Road Sixth Form students have secured places on a broad range of university courses and higher level apprenticeships, with many places secured at Russell Group universities including Oxbridge and in Medicine.  “They have been a fantastic year group.  It has been great to see them for results day today.  We can’t wait to hear how they do as they embark on the next stage of their lives at university, apprenticeships or employment – best wishes to you all.”

Claire Giblin, reflecting on the Teacher Awarded Grade process, “We are rightly proud of our robust process in creating teacher awarded grades.  My team has ensured a strong evidence base and placed integrity and professionalism at the core of our approach.  The grades were quality assured at several stages by the exam boards against national standards.  We are proud that our students have been able to overcome the significant disruption and achieve grades that are a true reflection of the hard work they have put in to their studies.”

“We are excited to open a new IT suite as part of our continued Sixth Form Centre improvements this September.  This is in addition to the million-pound investment in new classrooms, Science Labs and IT suites being built over the course of this coming academic year.”