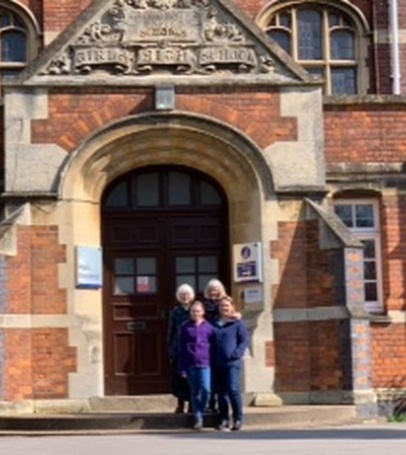 It's not often that five generations of women in the same family can say they've all sat at the desks of the same school.

So there's celebrations to be had when four of those women can all stand by the front gates together.

Sophie Monk, aged 10, is the latest member of the family to walk through the gates of Denmark Road High School in Gloucester.

Sophie's grandmother Sally, from Gloucester, remembers her days at the school in the 1990s fondly but says that "the rules were far more relaxed back then."

Sally told Gloucestershire Live: "We got away with a lot.

"Somehow I managed to stay out of trouble but we certainly bent the rules."

When asked what she was like as a schoolgirl, Sally says that she was "unconventional, perhaps."

She says: "We would break into the costume department of the school and dress up in all kinds of various dresses and wigs.

"There weren't half as many health and safety laws back then as there are now."

Sally says that she's happy that her granddaughter is soon to be sharing the experience at the school and is "very excited".

"Obviously her being the fifth generation attending the school has given her a sense of belonging.

"It's a great school and we were so happy when she got in."

Denmark Road High School in Gloucester has been around over a century, established in 1909 and currently employs 85 staff and has over 850 students.

On Wednesday, April 10 Sally, along with her mother Audrey, daughter Lucy and granddaughter Sophie gathered at the school on Denmark Road to celebrate five generations of women attending the school.

Despite the passage of time, Audrey, who attended the school during the Second World War, felt herself in familiar surroundings and found the visit "very evocative."

She remembered clearly the official planting of the May tree which has been retained as the school emblem to this day.

On entering the Hall Audrey said “I can just imagine myself standing here in my school uniform…I would have been so surprised if anyone had said that one day I’d be standing here with my daughter, granddaughter and great-granddaughter.”

Audrey said that part-time attendance became necessary during the war in order to accommodate the evacuee population.

The school field was used for air-raid shelters as well as for growing produce.

The luminous paint that marked the treads on the staircases for girls taking part in night-time fire watching was still visible when Lucy attended over half a century later.

Sally commented that many features in and around the original building have remained unaltered.

Her grandmother, Elsie, who attended the school before it moved to Denmark Road, was the only one not in attendance.

Some rooms have been partitioned but the general feel of the marble-lined corridors and wood-block flooring is unchanged as is the natural light particularly in the art room.