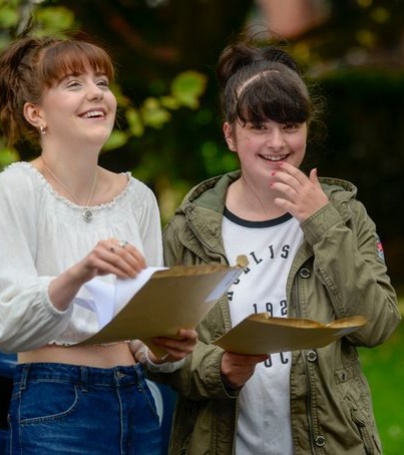 It was an emotional day for Headteacher Ewa Sawicka as she waved off students clutching the A-level results needed to achieve their dreams.

For this is the last time because she will be retiring as head of the High School for Girls in Denmark Road, Gloucester at the end of the year.

And judging by the constant stream of young women hugging her warmly and thanking her for helping them get into their university of their choice, she’s clearly a favourite with the students at the grammar which was named the best state school in Gloucestershire in the 2017 Real Schools Guide.

Students like Freya Savage who only thought the school motto ‘Believe, Achieve Thrive’ applied to the high fliers until Ms Sawicka showed her she wasn’t just interested in the A* Oxbridge pupils which the school is known for producing.

Freya wasn’t one of the many students to get straight As but she could not have been more pleased with gaining the results she needed to allow her to study to be a primary school teacher at Gloucestershire University.

“It’s been really hard and at one point I did not think I’d take the exams, but Mrs Sawicka and the rest of the teachers worked really hard,” said Freya after rushing through the doors at 9am straight into the welcoming arms of the headteacher and telling her the UCAS Track website said she had a place.

“I left here after GSCEs and went to another school because I was worried about not doing as well as the others, but it didn’t work out and I was really lucky because they had me back.

“I was so ready to give up last year but the teachers here are incredible and it’s paid off. I've always wanted to be a teacher and now I’m doing my dream degree at my dream university. I could not have done it without them.”

Pupils and staff often turn in some of the best exam results in the country at HSFG but this year there was a slight dip in the top grades as the system changed to focus on exam results rather than coursework.

Overall the A*-C pass rate was 83.3 per cent but the percentage of A and A*s at the Denmark Road school fell from around a 30 per cent to 24.2 per cent.

Mrs Sawicka said: "The important thing for me is that pupils are happy, achieve what they are capable of and get into the university they want.

“But it has been a struggle this year. The staff have not had any past papers and the syllabi have increased in content so there has been more to teach in a short space of time.

"On top of this we have had a new exam structure - we are going back to the days when I was in school and you took one exam at the end of two years.

“It’s difficult to know what to expect when there is so much change, but I was still a little surprised by the lower number of very high grades. Some of the results don’t seem to always match the work put in.”