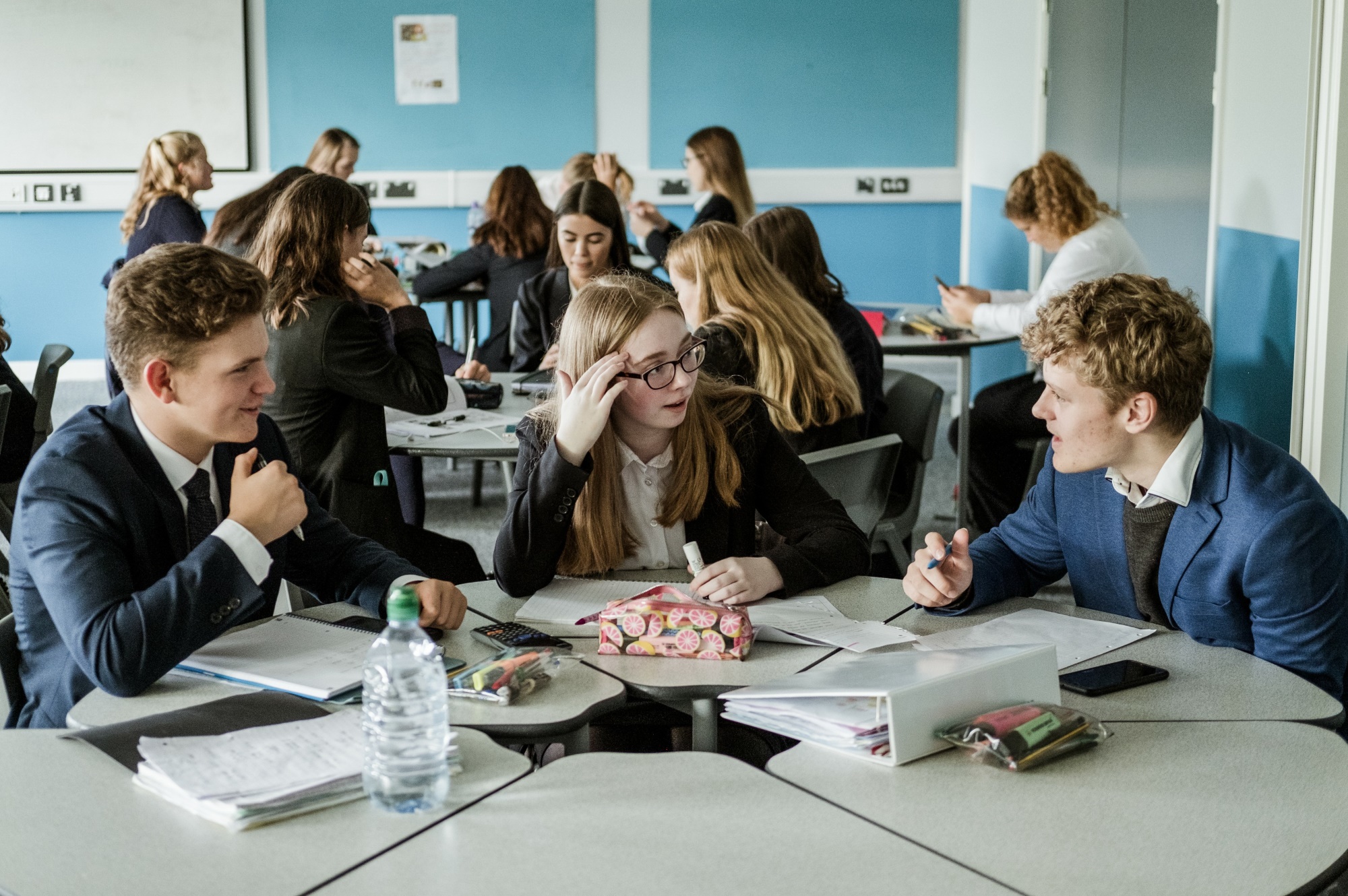 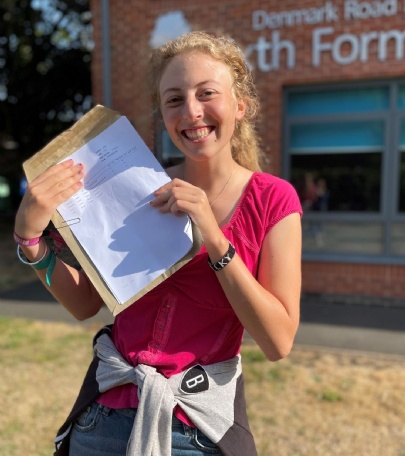 Year 13 students and staff at Denmark Road High School are celebrating excellent results today.  Results at A*-A were at 45% of all entries (an increase of over 15% from 2019 examinations).  Over sixty percent of students achieved at least one grade A or A*. Excellence at the very highest level was recognised with an amazing eleven students opening envelopes containing three straight A* grades.   A fantastic 27% of students achieved at least straight As; with three or more A Levels at Grade A.   Overall, achievement improved significantly from the 2019 examinations:  21% of all results were at A* and 92% of all qualifications were graded at A*-C.

Rebecca Greenough, achieved 4 A* grades in Biology, Chemistry and Mathematics and Further Mathematics.  She is looking forward to studying Medicine at Liverpool.  “I’ve been fine, it is my parents that have been nervous!  Can’t believe I am going to be a doctor – I don’t even need to cross my fingers when I say that anymore!”   Amelia Clarke, who represents England at U18 rugby, has accepted her place at Princeton University, in New Jersey, USA after achieving four A* grades.  Molly Carey-Topping, is off to Oxford University to read History after achieving A*, A* and A.  “It has been the worst morning of my life refreshing the UCAS page!  I am delighted to have got my place at Oxford.”  Lizzie Clements (A*, A, B) and Leigh Phillips (A*, A*, A) both chose to work last night to help take their mind off exam result nerves.  However, both were bouncing today when they received results as Lizzie heads to Manchester to read Philosophy and Politics and Leigh starts a Chemistry degree at Swansea.  The A* club continued with Harriet Saxton, Amelia Robertson and Miranda Gough all achieving straight A*s.  Harriet is reading Philosophy and History at Exeter University, Amelia is taking a place at Oxford University and Miranda Gough is going to Yorkshire to study at the University of Leeds.

Headteacher Claire Giblin said “These fantastic results are a richly deserved reward for our dedicated, hard-working students after an unprecedently tough two years.  It also recognises the efforts of our teaching and support staff who have done so much to help and encourage them.  We are proud of the achievements of our students, not just at the top end, where results were outstanding, but also with the positive progress students made at all levels during their time at Denmark Road Sixth Form”

Once again Denmark Road Sixth Form students have secured places on a broad range of university courses and higher-level apprenticeships, with many places secured at Russell Group universities including Oxford, Cambridge and in Medicine, Dentistry and Veterinary Science.  The boys who joined the Sixth Form in Year 12 performed wonderfully.  Isaac Phelps (A,A,B) begins his degree apprenticeship with the bank UBS in London in September although “most of what I earn will be going on rent!”  Huw Davies achieved A, A, C and is now going to take a gap year before going to Edinburgh University, “I have to admit, I didn’t sleep very well last night”.  Callum Nicholls faces a difficult choice between accepting a place at the University of Exeter or taking up the offer of a degree apprenticeship with GE Aviation.  Callum achieved A, B, B.

Director of Post-16 Holly Kowalewski said “It has been a privilege to work with this year group, who have worked closely with staff and who have supported each other so well during these difficult two years.  They have contributed hugely to the school and local community and very much deserve their success.  I’m so proud!”