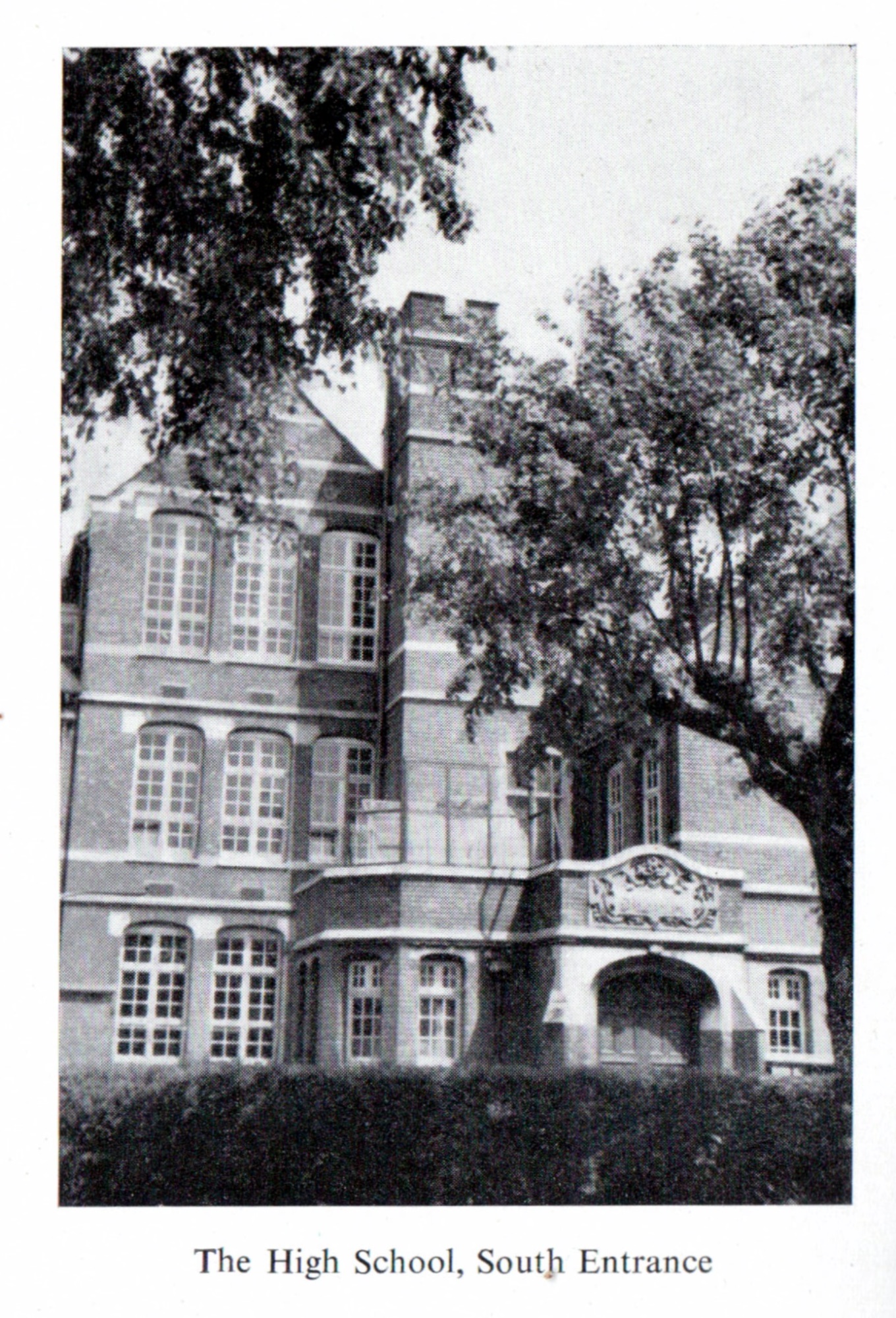 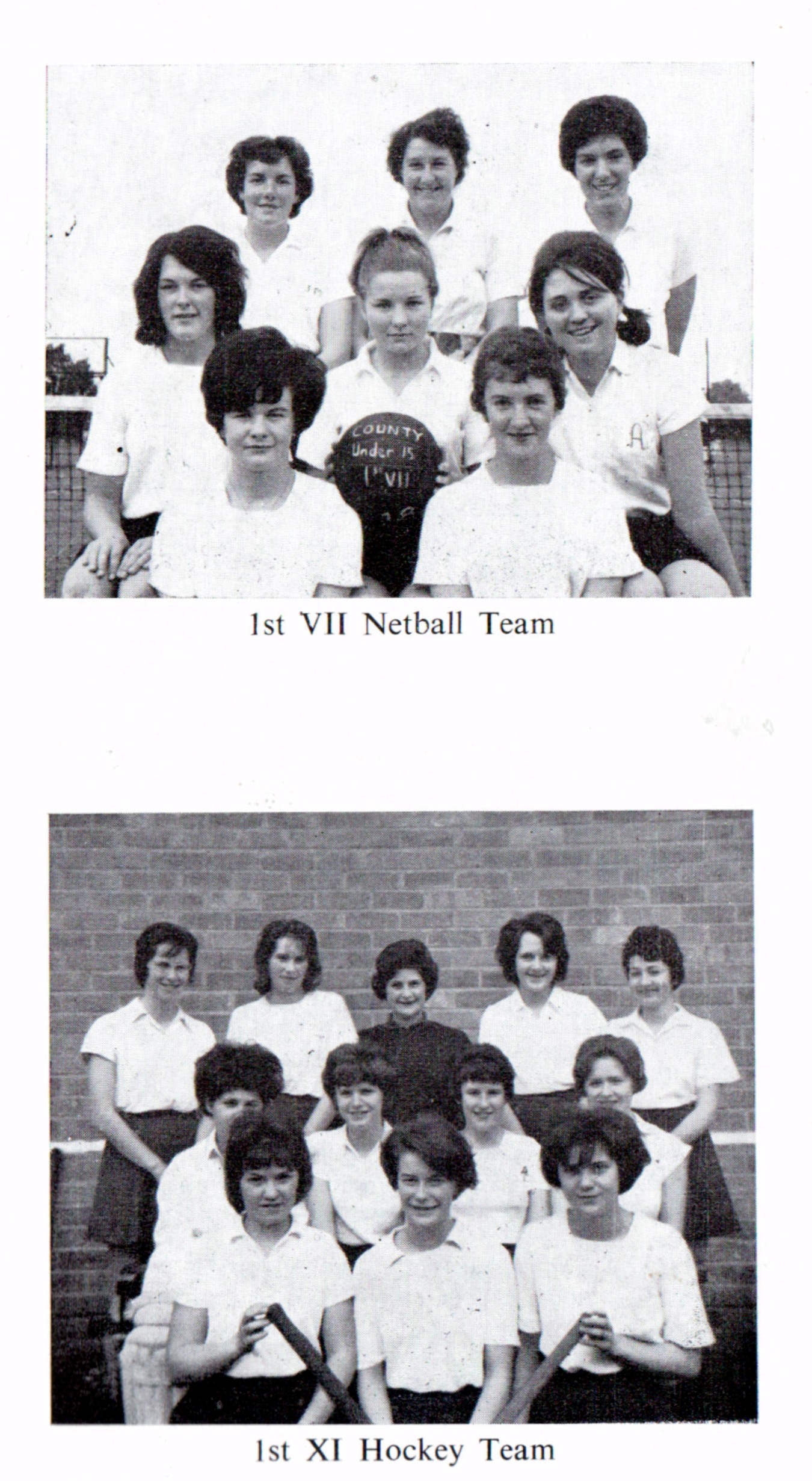 A new cover was designed for the School Magazine by Myra Watson U.V.H for the 1961-62 edition. 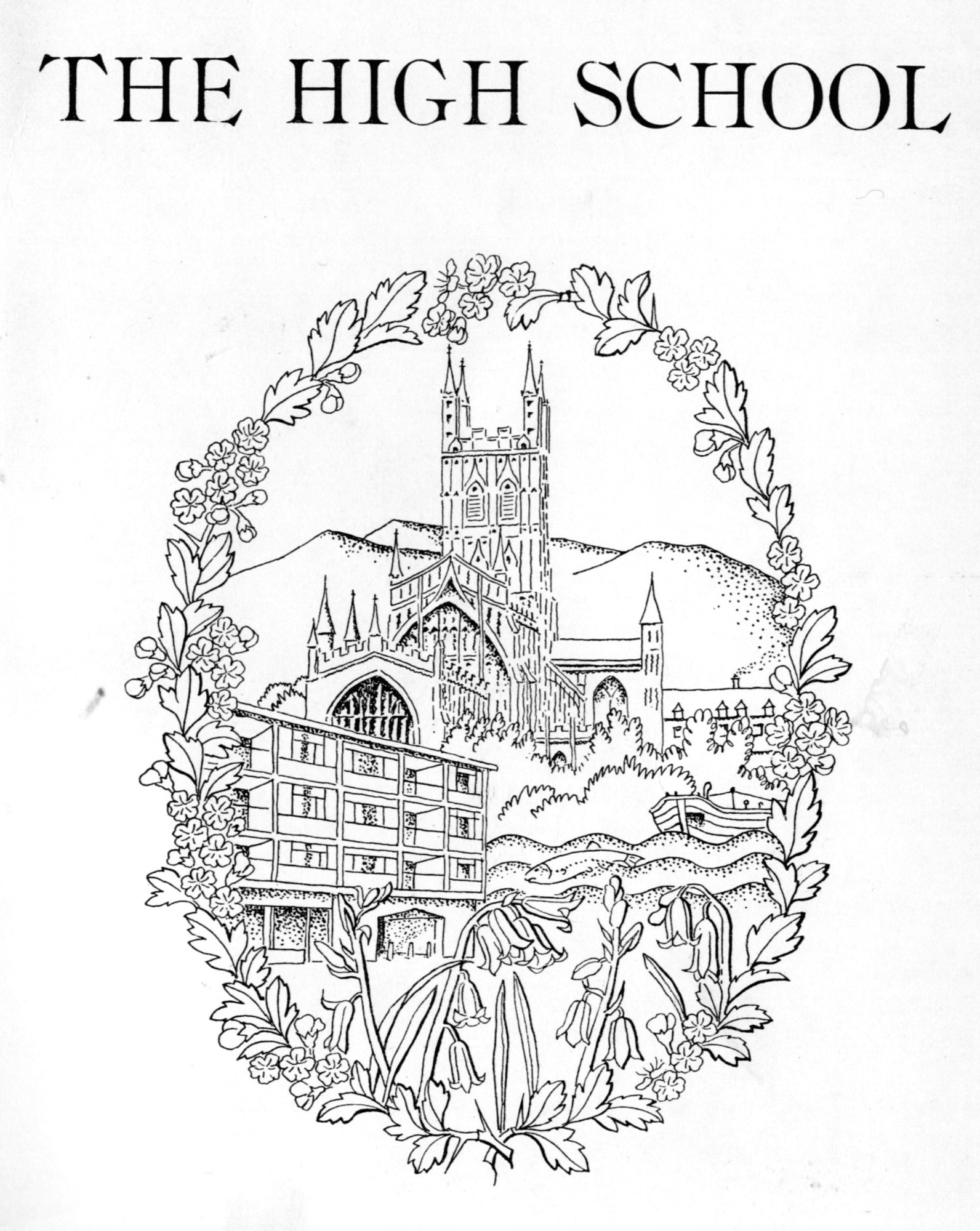 Miss Green retired after being at the school for 37 years.  She was appointed by Miss Penson in 1925 and after Miss Penson's sudden death in 1937, she became acting Headmistress for a term.  She had been Head of the German Department, Sixth Form mistress and for the last five years of her service, Deputy Head.

Miss Middleton retired after 40 years service.  She was a History teacher but she had a cultured outlook and delighted by her artistic gifts. 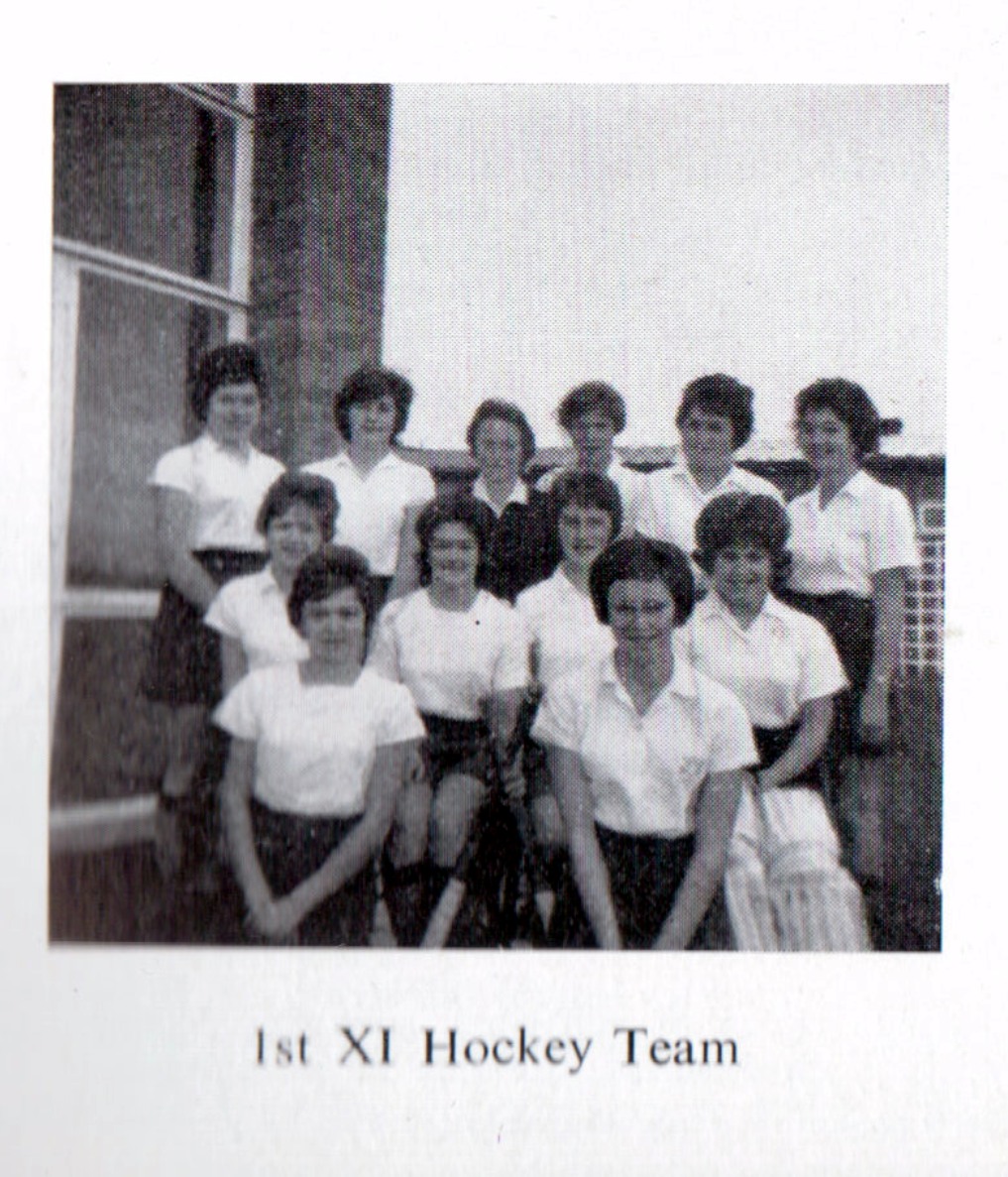 Pauline Thomas has gained her Diploma of Advanced Technology in Electrical Engineering.

Pat Westheusser (nee Higgins) SRN came home for a few weeks at Christmas.  She has been nursing in British Columbia and, after completing her midwifery course there this summer, she has married a member of the Canadian Mounted Police.

Rosalind Thomas is a student at thee Guildhall School of Drama and has just got her first TV contract.  She is appearing on ITV in the children's programme "Stop, Look and Listen".

Mary Nind is working for a degree in Town and Country Planning at Manchester University.

Karol Goldberg has passed part 1 of her Dentistry Finals at Bristol.

Judy Maxwell (nee Paget) is Private Secretary to the Ambassador of Ecuador.

Two mothers waiting to meet their daughters after a dancing class in Cambridge discovered that they were both Old Girls of the school and only one form apart.  Daphne Lloyd (nee Harris) now the wife of a Cambridge don and the other was Pat Whitehouse (nee Horlick) whose husband is lecturer in Botany in the University.  Pat has continued to work at Photography which was her hobby, even at school.   She now specialises in 3D colour photography of birds, plants and small mammals.  Children will know her set of 25 birds given away by a well known cereal firm.  She has made her own camera for stereoscopic work and has been made a Fellow of the Royal Photographic Society.

Janet Lane has gone to Nigeria and is teaching Geography at a school in Lagos.

Margaret Buttling is at a Methodist College at Ilkley training to be a Deaconess.

Karol Goldberg, having passed the finals of the LDS and RCS Examinations at Bristol, is a qualified Dental Surgeon.

Carol Mellerup (nee Davies) has started her own school of speech and drama in Dursley.

Audrey Butt has recently spent six months living with a tribe of South American Indians on the banks of the rivers dividing French from Dutch Guiana.  She went to study the traditional ritual and dancing.  Since her return she has broadcast on the Home Service.

Monica Sims has been appointed Editor of BBC Women's Hour. 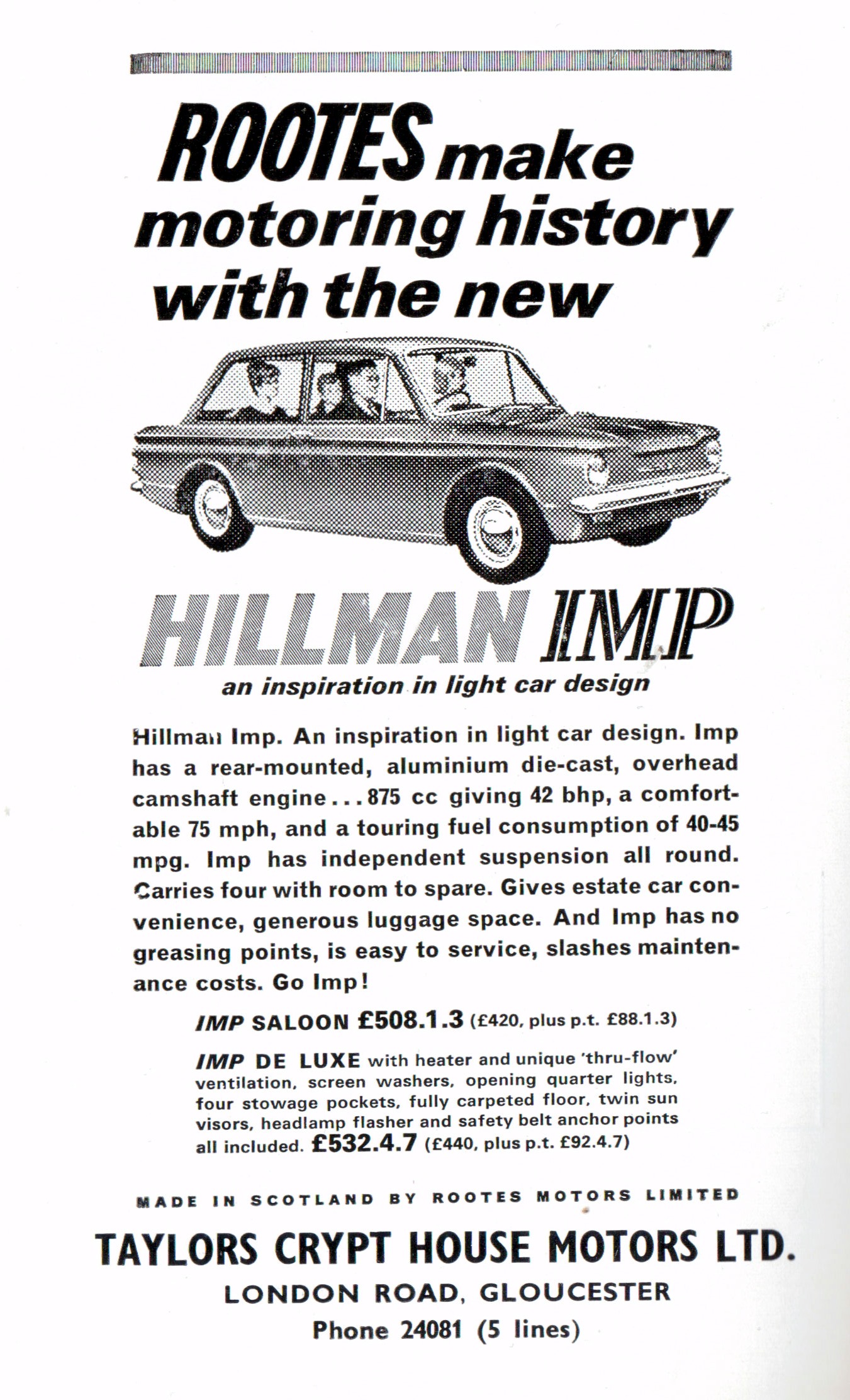