On 3 September 1939 war was declared against Germany.  The effect was so disruptive to school life that for the years 1939-40 no school magazine or leaflet was produced, although Speech Day was reported very fully in the Gloucester Journal of 4 November 1939.  From 1940 to 1948 Dr White issued an Annual News Leaflet, admirably succinct and packed with facts, so those years are treated here more fully than other periods, both for their unusual character because there is no other detailed record.

From September evacuees began to pour into Gloucester, which was classed as a reception area.  On 9 September a large contingent from King's Norton Grammar School, Birmingham, arrived by train with their Headmistress Dr Kitty Anderson, later Dame Kitty Anderson, and were conducted to Denmark Road.

The High School used the buildings in the morning, from 8.30 to 12.30 am, including Saturday.  In the afternoon, while the King's Norton girls were in the school, GHS girls had lessons in St Catherine's and St Mark's Church Halls.  Gas masks had to be carried to lessons.  After two terms the King's Norton girls returned home and the timetable reverted to normality.

Soon Air Raid shelters were built, in a row along thee Denmark Road hedge, and there were regular shelter practices. 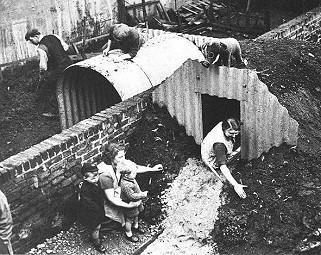 In 1940 the bombers began to pass over regularly, disturbing the nights with their heavy throbbing.  In January 1941 the Denmark Road area received a splattering of incendiaries, but the school escaped.  Gloucester was fortunate and shelter practice remained a formality until 26th March 1941. As with WW1 a lot of knitting and sewing was done providing comforts for the troops, including mittens for Russians and clothing for homeless families in this country and Holland.

From the beginning of the War the area where the school restaurant stands now was planted with beans, cabbages, onions, carrots and parsnips.  Another area was cultivated by the Parks Department and then it was possible to provide the kitchens with vegetables throughout the year.  Girls worked in the gardens during their lunch hours, evenings and weekends.  Sometimes they had to arrive early to pick icy sprouts before school and carry them to the kitchens on the top floor.

Taken from the Jubilee Journal 1958:

"All my contemporaries must have many wartime memories; leaving notes in our desks for the girls from Birmingham who shared the school when they were evacuated to Gloucester; air raid practices, first aid classes, the nuisance of always carrying gas marks about; but the most vivid of all to mee was due to the "Grow more Food" campaign when on wintry afternoon, instead of thee enjoyable gym lesson we had looked forward to all day, we were driven by Miss Durston to pick the caterpillars off the cabbages in the allotment on the playing field.   The atmosphere of seething injustice while we put the shining yellow things into jam jars was of an intensity which starts revolutions in more practically minded communities.

A much pleasanter experience was fire-watching at school, partly because it made us feel grown up and responsible.  Not only had we arrived in the Sixth Form but we were alo capable of fire-watching!   We took it in turns to sleep on camp beds but were usually too excited and too conscious of the empty echoing school all around us or the hard army blankets touching us to get much sleep.  The best part of it was sitting up in Dr White's room gossiping and trying one of the Woodbines (or were they Stars?) which she left on the mantelpiece.  I suppose now that these must have been intended for the Staff but we assumed that they were for us and took them as another sign of our adult status."

In January 1941 the Denmark Road area received a splattering of incendiaries, but the school escaped.  Gloucester was fortunate, and shelter practice remained a formality until 26 March 1941.

The girls had been in the shelters most of the afternoon and all was quiet outside, so at 3.45 pm it was decided that those who lived near could go home and the rest could take the air on the field.  At 4.00 pm a lone bomber appeared from the clouds, an RAF fighter streaked across the sky in hot pursuit, thee anti-aircraft guns peppered thee sky with flak, and to hasten his retreat the Junker lightened his load by dropping four bombs, which could be plainly seen leaving the aircraft.  There was destruction and death in the area of Derby Road and Millbrook Street, but fortunately the girls had not gone far and none was hurt.  Some ran to neighbouring houses for shelter, some lay on the pavement against a wall. 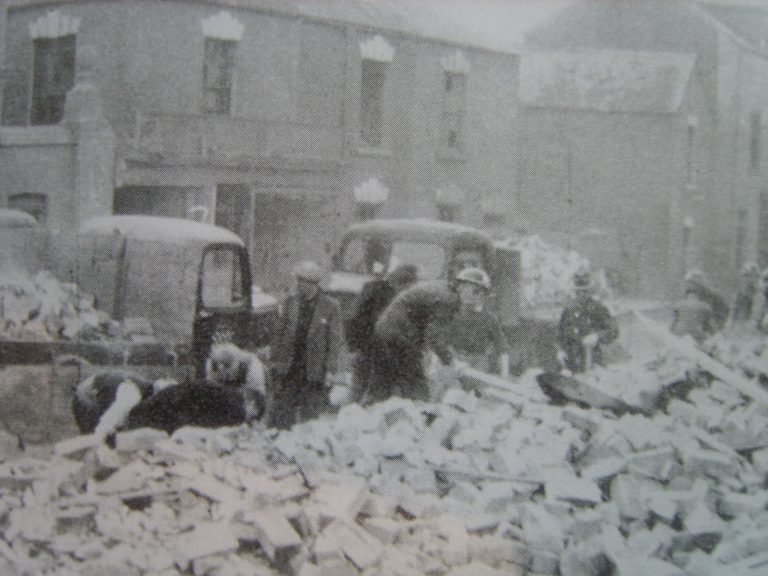