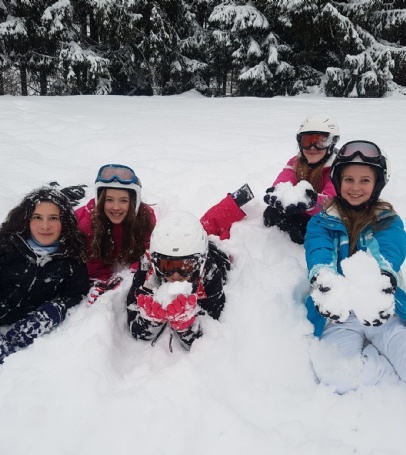 Our School Our Week

Picture of the week:

Picture of the Week

The annual school ski trip took place over half-term for 31 Years 8-13 students.  Wagrain in Austria was very snowy!  It was great to see their skills develop over the week, particular commendations in the form of the 'Altitude is everything' award went to:
We also had some 'Where's Wally?' awards.  How Brian the instructor escaped one with his face plant in the snow, I don't know!  Many thanks to Miss Leathart for organising.
Photos from the ski trip

On Tuesday this week, Year 9 had the exciting opportunity to watch the ‘Is It Worth It?’  e-safety tour. Firstly, two dancers performed a choreographed dance for us and then we were introduced to the topic of sending inappropriate pictures across the internet and the consequences of doing so. We were given some percentages of how many girls and boys our age across Gloucestershire who had sent or received explicit photographs or videos from either people they knew or strangers on social media, which shocked us. Luzzey sang us one of his songs called ‘Crystal Maze’ and later on in the production, sang us a song that is yet to be released, which we were very privileged to hear. Claire, who was the presenter, included the audience. We played interactive games that helped us to learn about the topic, and the winners won £5 vouchers. The ‘Is It Worth It?’ Tour was very educational and was a great opportunity for our Year Group to learn more about this sensitive yet important topic that affects many young lives.

​Tash Torkoniak in Year 10 recently took part in the Cotswold marathon overnight hike with the scouts.  She was part of a team that secured the mixed team trophy in the silver category.
Katy  Kalap in Year 11 took place in GB rowing trials last weekend, she came 6th in singles and 3rd in pairs, this means she will now be in n the GB pathway.  As an aside she also did pretty well in her mocks too considering her rowing commitments .... well done her!
UK Mathematics Intermediate Challenge
Our top mathematicians in Year 10 and 11 took the UK Intermediate Mathematics Challenge last term.
The girls did well and there were 3 gold awards, 17 silver and 23 bronze.
Emily Middleton in Year 11 and Felicity Simpson and Liberty Bignall in Year 10 all achieved a very high gold award and have qualified for the Junior Kangaroo - this is an extremely challenging test that they will be invited to take later this term.
Well done to everyone who took part.
UK Mathematics Senior Challenge
In November, 10 students from Year 12 and 13 took part in the UK Mathematics Senior Challenge. They did very well with this demanding test and there was 1 gold award, 2 silver and 5 bronze.
Abigail Bennett in Year 12 achieved a very high gold and was then invited to take the Senior Kangaroo later that term. She did very well with this extremely tough test and achieved a qualifying score.
Well done to everyone who took part.
Janet Marshall Dance Production of Narnia
The following students were involved in the Janet Marshall Dance production of Narnia at the Bacon Theatre, Cheltenham on 11th and 12th February: Emily Watine, Ella Bowman, Tehya Lewis, Charlotte Foster, Rosie Mason, Sophia Decatris, Amelia Thomas, Annabel Garcia-Rodriguez, Ceri Rigby, Anna Bowman, Olivia Frankland, Alice Read, Vinuji Gomes.
Big String Workshop, Gloucester Cathedral
In half term the following students took part in the ‘Big String’ workshop in Gloucester cathedral. This was run by the Gloucester Academy of Music and included 140+ of the county’s best string players: Hermione Smith, Georgette Thomson, Beth Candish, Lana Slade, Emily Wiles, Grace Towle, Maisie Pearce, Holly Wan, Caitlin Wild, Evie Perfect.

24 of our students had an amazing day at National Grid House, Warwick, taking part in Girls 2 Tech on 2nd February.  National Grid offers just one open day a year so it was a great privilege to take part and meet the female CEO.
We were involved in a variety of activities such as finding out about cyber security, designing our own health app and trying out a virtual reality exercise. We all really enjoyed it and found it useful for our lives. We were told about how there are very few women in the IT field, and it encouraged us to pursue careers in IT.  Fortunately, we got to visit the underground area of the building which prevents hackers from infiltrating National Grid systems which could lead to a blackout across the UK. Overall, it was a very exciting and informative visit to National Grid, which everyone really enjoyed.  Aalia Indawala and Ellie Clarke (Year 9)

This will be week commencing 26th February 2018 in the main hall.  Best wishes to all Year 13 and Year 11 sitting their exams.  As always students should be encouraged to balance study with rest and relaxation time.  In my now immortal words to Year 13:
"Go forth!  Revise and Conquer!"

Forward look - dates for your diary ...